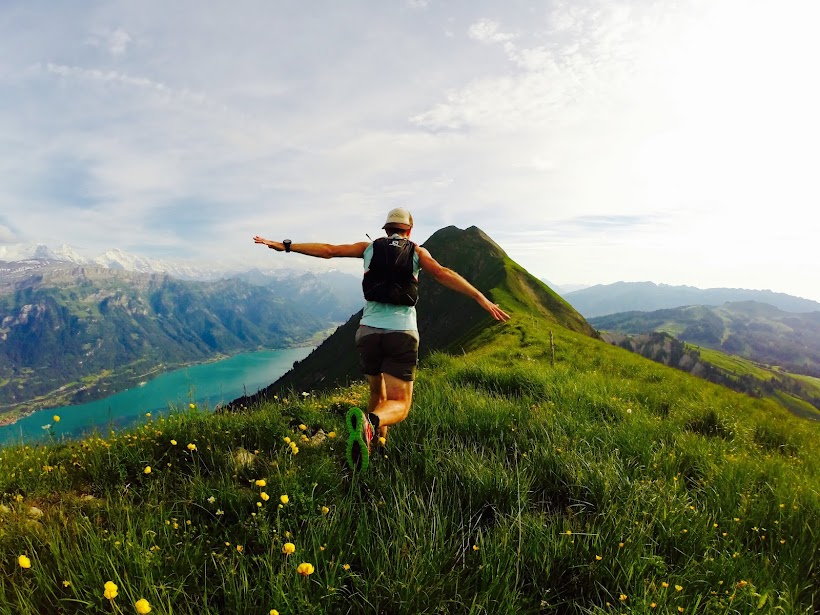 The Bunker to Bonneville (B2B) was one of the proudest races of my life, and my 2nd Ultra.


After hearing about this event only 2 days before the event, I signed up with very little expectations. My fitness wasn't perfect, but I could manage a 50K run. The race takes place along the Pacific Crest Trail (PCT), a point to point race from the Panther Creek Campground in Carson to the Hot Springs near Bonneville Dam. It looked like a great training run along a beautiful course, so that was reason enough to sign up for this small race ('bout 50 racers).


I arrived at the Hot Springs (the finish area) hours before the race began, just so I'd have some time to relax and chat with people before the race. My friend Mercedes was there, who co-directed the PCT 50 miler in 2010. It's always fun catching up with a friendly face at an ultra race! (<--Haiku). We hitched a ride with one of the local volunteers (Nicole) to the start of the race. Nicole made great company before the race, sparking all sorts of conversation. Her son rode in the back with us, and he mentioned how he once got 11 semi trucks to honk their horns in one road trip...needless to say, I was impressed. When we arrived at the Panther Creek Campground, they dropped us off and drove back into town. (Thanks again for the ride!)


The race eventually started, and I quickly squeezed into 6th place as we reached the single track PCT. Considering my last 50K was ran pretty conservatively, I decided to keep pace with the front runners and see what I can do. The course starts out relatively flat for a few miles before reaching the first big climb. The front runners stayed together throughout the climb, which was kind of nice.

As I quickly discovered, there were no porto-potty's at any of the aid stations. SO, at the 10 mile aid station I had to bail down a side road and find a nice quiet spot in the woods. Sadly, I chose a location that had no ideal TP anywhere, so I had to get creative. When I eventually got back on the PCT, there was ivy and leaves EVERYWHERE...shit, how did I find the only barren spot in the woods?﻿ Oh well, Live and learn... 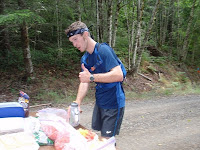 After my short break, I had some catching up to do! It was the start of a long downhill at this point, so I pounded the trail hard to make up some ground. One by one, I passed at least 5 runners. When I reached the next aid station, they told me I was in 3rd! And my buddy Larry (2nd place) was just leaving the aid station. It makes the chase so much better when you know you're close behind the person in front of you. I set my sights on Larry as the next looong climb began.
As I mentioned earlier, I wasn't in the best shape...so my strategy was to go hard for 22 miles and let the last 9 miles of downhill carry me home. When that second hill started, though, all I could do was power hike. I rely on downhill sections to recover, but this hill didn't even have a flat section for miles! F! Hiking along, Larry eventually came into view. We kept the same pace and just plugged away at the trail, having some conversations here and there. As we reached the peak of the course (an out and back section to 3 Corner Rock), we saw the 1st place runner Ryan only a couple minutes ahead of us at the most. With about 9 miles of downhill left to go, I was feeling good and ready to jackhammer my legs down a good 3,000 feet descent....mother of God.
The downhill was a relief at first, since my body shifted to neutral and let gravity to all the work. Larry, being the good friend that he is, did nothing but encourage me the whole time. "You can catch him, Jason," he would say to me. "Shit...ok" said I. The last thing your body wants to hear after 20+ miles is to run HARDER...but what the hell? So I started leaning forward a little more and letting my legs pound the ground without mercy. Then I ate shit hard, stubbing my toe on a rock and flying like Superman. My water bottle was dropped, along with a few F-bombs. Lesson learned, PICK UP YOUR FEET! 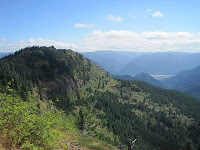 Down, down, down the trail I went. The path eventually came to a clearing where Ryan (1st place) was only a stones throw away. After catching up to him, I tailed him for a bit...content to let him set the pace, but at the same time I was looking for some opportunity. With about 3 miles to go, the path widened and literally looked like a creek bed (rocks everywhere). Ryan was wearing the minimalist MT-100 trail shoes, which couldn't have felt too great on those rocks. My Columbia Ravenous had plenty of cushioning and protection, the rocks didn't slow me down and I pulled ahead of Ryan. After 5 minutes or so, I looked back and couldn't see him! With only 2 miles left to go, could I hold on to win this thing? All of a sudden, William Wallace's speech from Braveheart popped into my head...
"Aye, fight and you may die. Run, and you'll live... at least a while. And dying in your beds, many years from now, would you be willin' to trade ALL the days, from this day to that, for one chance, just one chance, to come back here and tell our enemies that they may take our lives, but they'll never take... OUR FREEDOM!"
I definitely felt like dying in my bed at that moment, but having the lead with 2 miles to go in a 31 mile race...I decided I'd rather die running.
The downhill ended, and there was about 1 flat road mile left until the finish. As I reached the road, a gentleman was standing there (probably a scout). As soon as I passed  him, he got in his car, drove past me, and parked his car far enough ahead so he could get out his camera and take my picture or something. Lo and behold, he said Ryan was a quarter mile behind me. That sounds like a cushy lead with a mile to go, but my legs were spent! That downhill section was hard on the legs, and this last flat section felt like a death march. My pace was relatively slow, and the road was radiating heat that didn't exactly feel THAT great.


A minute after I was 'filmed' by the man, I looked back and saw Ryan closing in. He was A LOT closer than a quarter mile at that point. His light minimalist shoes are perfect for these long flat stretches, and I was running scared. WHERE'S THAT DAMN FINISH LINE?!?! I kept it 'steady as she goes' to the best of my ability, and FINALLY the home stretch came into view! Ryan wasn't too far behind me, but he wasn't going to catch me at this point. I saw that glorious finish line tape, raised my arms as high as I could, and accomplished something I never dreamed of doing...win an ultramarathon.
Results:     5:06:05 - 1st out of 48 Finishers
Pace:     9:52 min/mile 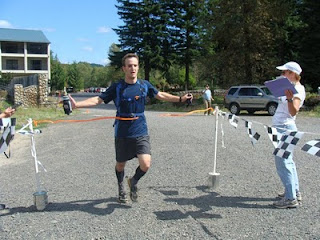 My finish time wasn't a course record, and it definitely doesn't rank with an 'elite' status, but damn it felt good! Ryan finished just 19 seconds behind me. In a 5+ hour race, it's amazing how close it was. My hat off to Ryan, he brought out the best in me that day. I hope we race again soon.
The rest of the day, I spent at the finish area hanging out and talking with people. For such a small running community, I saw a couple Western States shirts and learned that both race directors were both 100 mile Veterans! Turns out the Columbia Gorge Running Club is extremely active and has a tight-knit community with runners of ALL levels. I'm happy to say I'm still in touch with some of them today, and hopefully I'll get to run with them soon! Thanks again for putting on a great race!
All in all, that was a great day. Thanks to everyone who made the day possible, ESPECIALLY Larry. That guy definitely got me running faster than I otherwise would have.
Cheers!
Posted by Jason Leman at 11:37 PM

Jason Leman
Portland, OR, United States
Hello, my friends! So, I've decided to create a blog. My goal is to focus on my running...and to document my journey of finding true enlightenment. I don't aim to inspire or compare my life to others; I've found a source of renewable happiness that I'm only beginning to tap into, and I would like to share those experiences with you. Cheers!